How to spot a drone at night (and how far can they see?)

Guide and test to see if drones can spy at night

You may have experienced a few instances where you found drones hovering around your property at night and are wondering if they're spying on you or not.

But before you can tell what a drone is doing, you need first to spot it at night yourself.

If you want to spot a drone at night, you need to look for the sound the propellers make, the red and green navigation lights, and potentially a strobe light. You can also use a radar-like device to detect the presence of a drone close to you, even at night.

In this article, I'll test how far a drone can see at night, how far you can see it and how loud it is at different heights to see if it's actually possible for drones to spy on you at night or not.

In the end, I'll cover all the ways in which you can spot a drone at night.

To detect a drone at night, we first need to figure out how drones actually look, what lights they have, and how far you can actually see them.

At night, all hobbyist drones must have a set of four navigational lights, two red and two green. In addition, commercial drone pilots need to have a powerful strobe light that can be seen flashing from at least 3 miles away. Here's my complete guide on how to fly a drone at night.

Most drones look like red and green dots in the sky, while commercially flown ones have a very bright (usually white) strobe light that can be seen flashing up to 3 miles away. 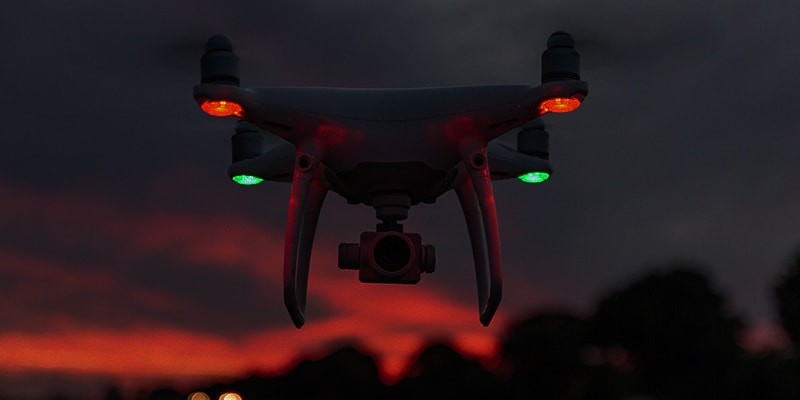 How far can drones see at night?

While most drone cameras differ, most can see just about as good at night, so in this experiment, I'll raise my drone at different heights to see how far it can see me and take pictures.

A typical drone can clearly see a person at night up to 50 meters away, after which point it can only see a blurred figure. Unless they have night vision, drones can see objects at night only if they're well lit.

Now let's see my test of how far drones can actually see a person at night and how that corresponds to how well you can detect them instead to see if we have any reason to worry.

I took a lot of pictures and videos with the DJI Mini 2, one of the most popular consumer drones to see how well it can see at night at different ranges.

As you can see, from just 10 feet alone, it can clearly see what you're doing indoors, but it's also super easy to see the drone and especially hear it.

There isn't enough light inside to make this a clear image, but you can see that even at a pretty close range, it has a difficult time showing what's indoors

My grandpa had the best position possible, good interior lighting, and went half naked, so why he made for an exceptional subject.

This time I decided to zoom in 3 times from the same distance and as you can see you can still tell some details apart. However, if you're indoors it's going to have a really difficult time to capture anything relevant at this distance. It's also quite easy to spot the drone at this distance because of the sound and lights.

At this distance it's almost impossible to detect what anyone is doing and you can barely see some shapes, even with a 3 times zoom and clear indoors lighting. If there is not much light indoor you can barely even see there is  a person in there. At this point you have about as much privacy as some neighboring building looking at your building.

While there are more expensive drones on the market with better lenses and zoom capability, it takes tens of thousands of dollars to get an image better than this by much. The typical neighborhood spy will get very similar drone images to what you're seeing here at night. As you can see, from this distance, there's barely any change anyone can see what you're doing, and while the drone is more difficult to hear, you can still take notice of it if you pay some attention.

How do you tell if a drone is watching you at night?

If you see a pair of red and green dots at night and even hear the drone, it doesn't necessarily mean that it's spying on you.

I'm a drone pilot myself, and people panic that I'm recording them, while in fact, I'm taking some night shots of the city instead.

The best way to tell if a drone is watching you at night is to detect if the red lights of the drone are facing your direction and the green lights away from you. This means that the drone has the camera oriented towards your general direction.

However, keep in mind that even so, the drone camera might capture something else entirely. If you can't hear the propellers spinning well or can't see the drone orientation, it is most certainly too far to be able to spy on you (especially at night).

How far away can you hear a drone at night?

While sight is a great measure to know if a drone can capture footage of you, sound is just as good of an indicator that the drone is close or far enough to see you.

Sound is a great indicator if a drone can spy on you or not as we've seen previously that drones farther than 100m don't stand a chance of capturing a clear image of you at night especially.

If you're sure someone is flying a drone around your property at night, it's best to make sure of this fact and use some proven detection methods.

You might find some apps in your phone app store that claim to detect drones by capturing their radio waves and telling you what kind of drone it is and where the signal comes from.

Phone drone detector apps don't work, as most drone signals are encrypted, and even if using wifi, it's impossible to tell if the drone is close to you or far away.

There are systems out there that allow more professional detection of drones but are usually used by the military, not just a simple phone app.

Watch out for the drone lights

As we've mentioned before, watching the lights of the drone is the easiest and most effective way to spot it at night.

If you see two pairs of red and green lights in the sky, it's probably just a hobbyist drone. If you can barely detect these lights, it's most certainly too far away to be able to spy on you anyway.

If there's a powerful white light flashing in the sky, it's probably a commercially used drone, and since the pilot made it so visible, it's perhaps not intended for spying on anyone.

Check out my article on the best anti-collision drone lights on the market.

Listen to the Sound of the propellers

As someone who has flown and reviewed dozens of drones, from beginner quadcopters to professional ones, I have concluded that all drones are super noisy, and even more so at night when there's not much surrounding noise.

This means that if you are outside and there's not much noise around you, it's almost impossible not to hear a drone before it sees you. Of course, there are fixed-wing drones with expensive night vision cameras or zoom cameras that can make considerably less noise, but these are so expensive that nobody in their right mind would buy them to spy on someone.

Infrared cameras can see much clearer at night compared to the human eye. So even if someone decided to take off their drone lights entirely and use the most silent propellers possible to get close, you can still detect the drone and record it in the night with a lot of clarity.

You can install regular infrared cameras that work non-stop or motion detection ones that start recording only when they detect any motion. The problem with motion detection is that the drone might be too far away for them to trigger, as motion detection usually works between 20 and 30 feet.

Microwave Motion sensors can be connected to lights mounted atop each window, and they operate on the same principle as a highway speed gun used by the police. It's basically like a bat that uses echolocation, as they send electromagnetic waves to objects and measure the movement when they bounce back, triggering your lights and letting you know there's something outside, in case you can't hear the drone from indoors.

Radar is the more hardcore solution, as radar detectors for drones can get quite expensive, but they can monitor a larger space compared to microwaves and can even differentiate between drones and birds.

Conclusion - Can drones spy on you at night?

While modern drones can come with a zoom camera, most hobby-grade ones don't have the technology to film you before you detect them by the noise they make. Therefore it would require a costly drone ( I'm talking $10,000+) to be able to spy on you to some extent before you notice it in the air.

Most drones can't spy on you at night before you can detect them by the propeller noise they make or simply their flashing lights.

Paul Posea
Hi, I'm a long-time drone reviewer and I hope my articles and comparisons on this site as well as Dronesgator's youtube channel are of as much help as possible.
DJI Mini 2 Battery - Here’s What You Need To Know
DJI Drone Won't Turn ON or OFF (Complete Troubleshooting Guide)
Drone Battery Won’t Charge? Here is How to Fix It (Complete Guide)