What to look for and what to avoid

While looking for an underwater drone seems like no easy task, there are a couple of things you should look for and that's what this article is all about.

These underwater ROV's(remotely operated vehicles) were no long ago only used by professionals, but now you can get pretty affordable ones for exploration and personal use.

I'll give you a list of the best things to look for in a submarine drone and my best underwater ROVs selected by such criteria from all the online abundance.

Two things you should quickly note before jumping into my top list are the fact that most of these aquatic drones are tethered via a cable to a floating beacon at the surface, mainly to get a good live feed to the surface.

They are also equipped with powerful LED lamps to easily navigate dark underwater territory. I'll talk more about other accessories down bellow. 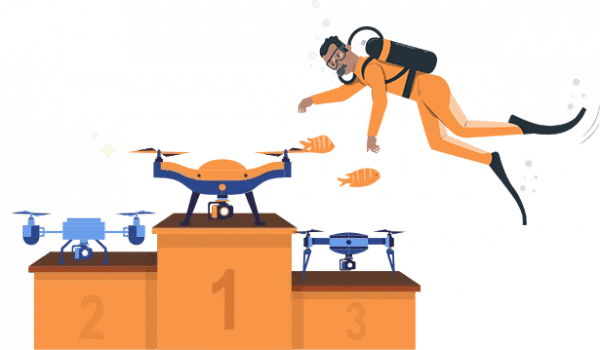 In this section, we're looking at most underwater drones for sale currently on the market (the consumer level ones) and underline which ones are worth and which aren't.

Here are 5 of my favorite underwater drones compared in a table (in no particular order).

Read the entire article for more information on each of these!

These are most of the easily accessible and cheaper underwater drones available for sale, but I'll only recommend a few of them for specific purposes. 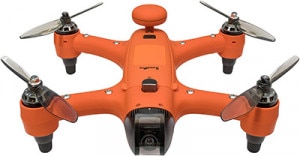 There is one flying drone on the market that can actually even submerge, float and fly very fast if needed. If you want to take some underwater shots, but mainly want a drone that flies fast and is durable, the Swellpro Spry+ is one of the most resilient ones you can find. It comes with GPS, return to home, fully waterproof remote and doesn't corrode in salt water, but you can find more about it here. 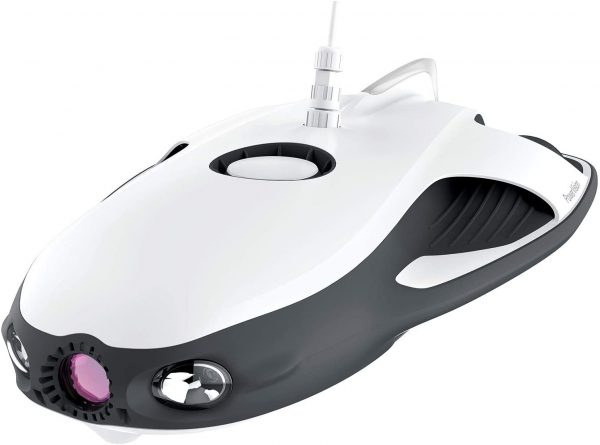 One of my favorite underwater drones, the powerray is probably the best fishing drone too, thanks to its fishing add-ons available like the bait and drop, powerseeker fishfinder that can detect fish to a depth of 80m.

For the specs it has, the price is also very well deserved, being able to swim for 240min, which is more than most on this list with a 100m (230ft) tether cable, means you have plenty of space to play with it in the ocean and not feel constrained.

It comes with a 4k camera that's not stabilized but is mounted next to two powerful LED lights. 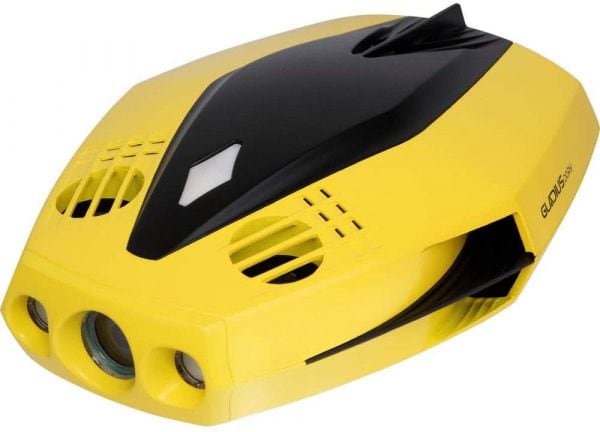 Chasing Dory is the cheaper option when you're looking for an underwater drone and even though it doesn't have the highest specs, it might just be enough for most people to have a lot of fun.

It can dive up to 15m in the water with a tethered cable of the same length and it can swim for about 60 minutes while streaming 720p video to the phone and record 1080p 30fps on a micro SD.

It also has two 250 lumen lights in front and a color restoration algorithm that is supposed to make things look a bit better.

This is the highest level entry on this list, making for some stunning specs, high water pressure resistance, and a 1080p live feed to the controller.

The 150m tether length is pretty much unbeatable in this price range and the two extra bright 1500 lumen lights make for some of the most exceptional underwater explorations you can imagine.

Its real strength is the 6 thrusters (4 vertical and 2 horizontal) which can help it self balance against currents and hover in place.

The 4-hour battery life is also making it on top of the list and what's more, it also comes with a range of accessories, the best of which is a robotic arm for grabbing things and bringing them back to you. 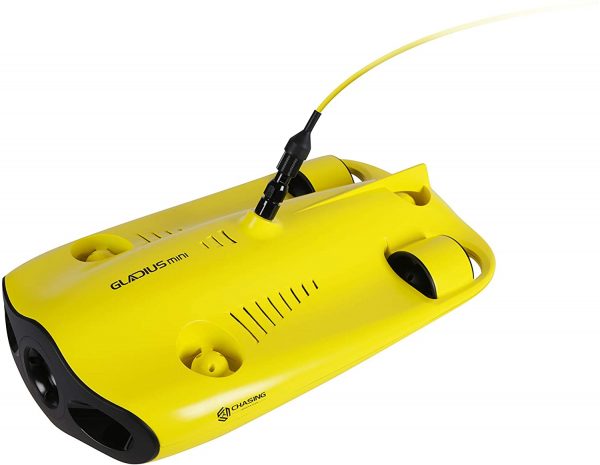 The Gladius mini is an underwater smart submersible with a 4k camera, 5 thrusters that give it great maneuverability and a great 1080p Livestream (the best on this list).

The camera can also adjust the pitch up to 45 degrees in each direction. The Livestream can be seen simultaneously by 3 devices like smartphones and it has a 100m tether(or the cheaper option with a 50m cable). Battery life is at 2 hours and it can reach up to 2m/s. 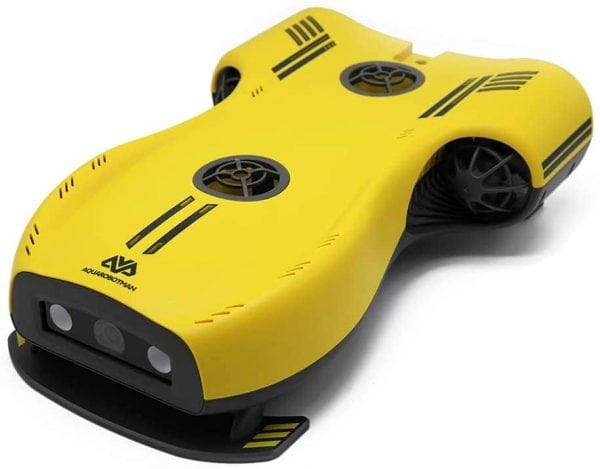 A Kickstarter sponsored project, the Nemo drone has most things people are looking for, long-range of 100m, 120min battery life, a balance stabilIzing system, and can be used with VR sensors when tilting your head to move the drone camera at the same time.

Depending on your budget, this may or may not be the perfect one for you. I think there are better ones on this list in terms of cost and specs, so let's look further. 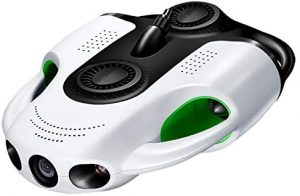 This is one of the few if not the only drone that can come with a zoom camera (the good optical type) which can definitely prove useful in many situations. The specs are quite outstanding, having a 130 degree wide angle lens, 4 thrusters which help a lot with very precisely controlling the direction and stabilizing and a 100m cable.

What's most impressive about this is the battery life of   5 hours which is most than any of the drones on this list. However, one downside is that in the basic package (that's already well ofer $1000) comes with just a 1080p camera, and you need to pay extra if you want the 4k cameras. 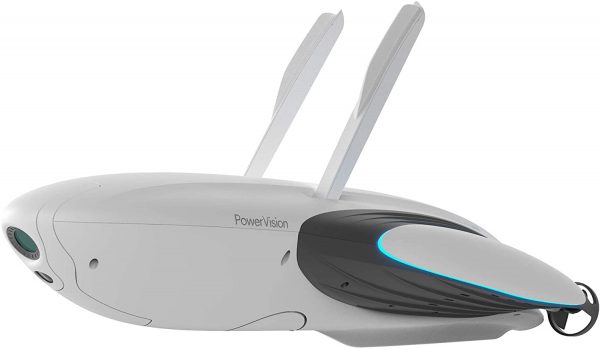 While not an underwater drone, the Powerdolphin is a great fish scouter and amazing looking boat-like drone.

It can be used to scan the fish in the water to find the perfect fishing spot and even tether you fishing hook.

The camera can rotate to see bellow, you can actually do some underwater exploration this way too.

It also has add-ons available like a bait container, tow line and powerseeker sonar.

While very compact, and with pretty nice features like 180min swim time and good operating temperatures, it lacks behind some of the other underwater drones on the list as for the hefty price it lacks some important specs like a long thread (it only has 25m) and a 4k camera (coming with 1080p). So my advice is to skip this one. 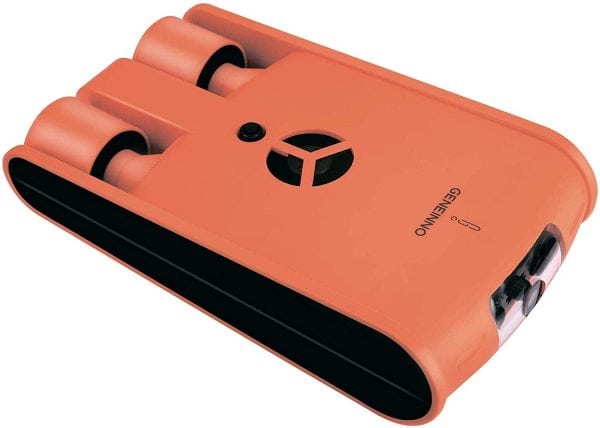 While its bigger brother, the Titan does really well underwater, the Poseidon stumbles a bit, especially since the specs aren't that great for the price. It also doesn't come with a controller, but it does have a serious 100m lenght tether. Considering the feedback of other online reviewers outhere like Dustin Dunhill, this underwater is to be avoided.

What to look for in an underwater drone 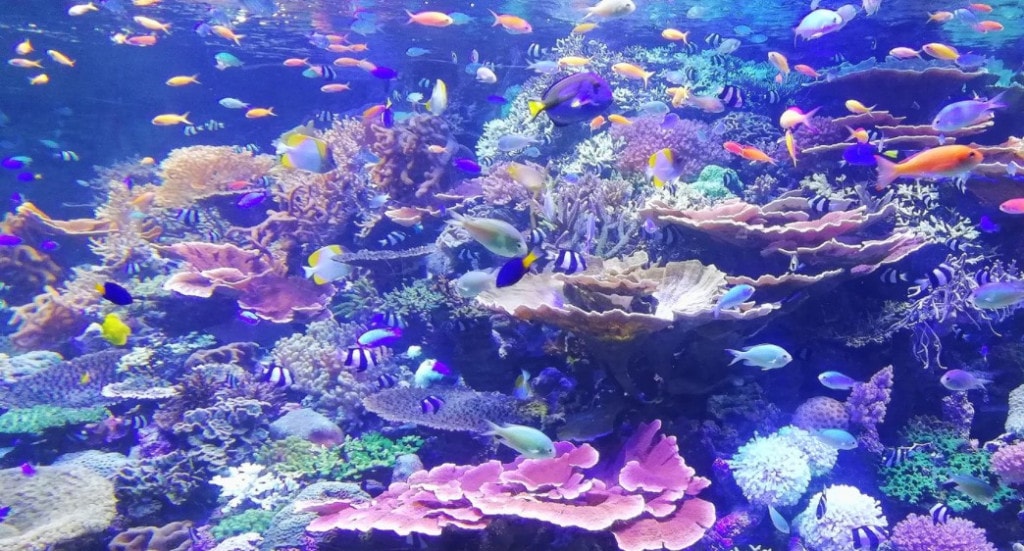 Most underwater ROVs are tethered with a long cable to the surface, unlike their airborne counterparts who rarely are tethered and are free to fly anywhere.

There are some good reasons for that:

It works as a leash to bring the drone back in case motors failed or it got stuck in some unpredictable marine crease, got out of range, or damaged some part.

The second reason for a tether is using it to transmit live information, as the Livestream has a difficult time traveling through huge amounts of water, this live feed is to see what the camera records in real-time to see it on the controller screen, your phone or even FPV goggles.

Cable lenghts vary depending on the manufacturer, but they range somewhere from 20m to 200m.

Again, a massive difference compared to normal quadcopters is that the visibility underwater is greatly decreased, sometimes to the point of not being able to see anything.

The camera itself also has to be quite high quality to capture as much detail as possible ( especially if you're going to use the footage it records in post-production). If it's only for the live feed, the camera quality isn't really that important. Even so, most underwater drones these days come with 4k cameras, some of which are even electronically stabilized.

The equivalent of propellers for normal drones, thrusters are basically underwater props attached to motors that can be either static or moving, depending on the model and have the purpose of guiding the underwater rover in 3 dimensions underwater.

There are underwater drones with 2 thrusters and up to 8 thrusters for more controlability and easier 3D movement. The maximum speed these usually get to is between 2 and 5 meters per second.

Battery is very important for obvious reasons, since you don't want to get your drone out of the water unless you're done exploring.

Pros and Cons of underwater drones

In this final section, we're taking a look at some specific questions that people ask me, which might also be useful to you.

While looking for an underwater drone seems like no easy task, there are a couple of things you should look for and that's what this article is all about.

These underwater ROV's(remotely operated vehicles) were no long ago only used by professionals, but now you can get pretty affordable ones for exploration and personal use.

I'll give you a list of the best things to look for in a submarine drone and my best underwater ROVs selected by such criteria from all the online abundance.

What are underwater drones?

Underwater drones are controlled drones that can navigate underwater, basically a remote controlled submarine, used for capturing underwater footage, but also could be used to collect scientific information and materials especially if they come with an accessory such as a robotic arm that could deliver samples.

How much do underwater drones cost?

Underwater drones cost somewhere between $500 and $4000 while the average price is around $1000 for a good quality underwater drone.

Where are underwater drones for sale?

Underwater drones are for sale at most online resellers like Amazon, Bangood and Gearbest. You can also purchase them in brick and mortar stores or directly from the manufacturer.

What are underwater drones used for?

What are underwater military drones?

Military underwater drones are high tech, very expensive  mini-submarines that are used to map and survey for the protection of coastlines. One example of such a drone would be the Aquabotix SwarmDiver  of which many are used at a time to swarm an entire area and survey it more effectively.

Underwater drones can be quite different compared to their airborne counterparts, but the struggle is definitely worth it, especially when you'll be rewarded with intimate moments discovering unknown depths… even if that may be the local pond.

Paul Posea
Hi, I'm a long-time drone reviewer and I hope my articles and comparisons on this site as well as Dronesgator's youtube channel are of as much help as possible.
How to Collect Water Samples Using Your Drone (Cheaply) 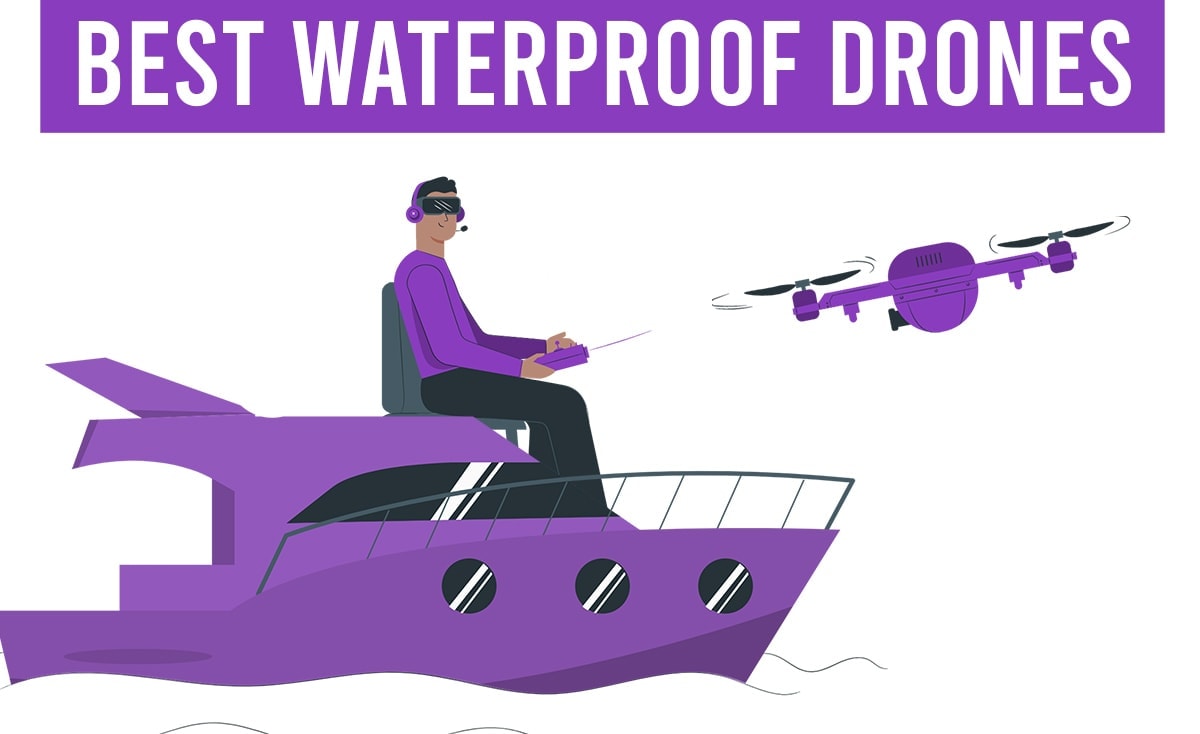 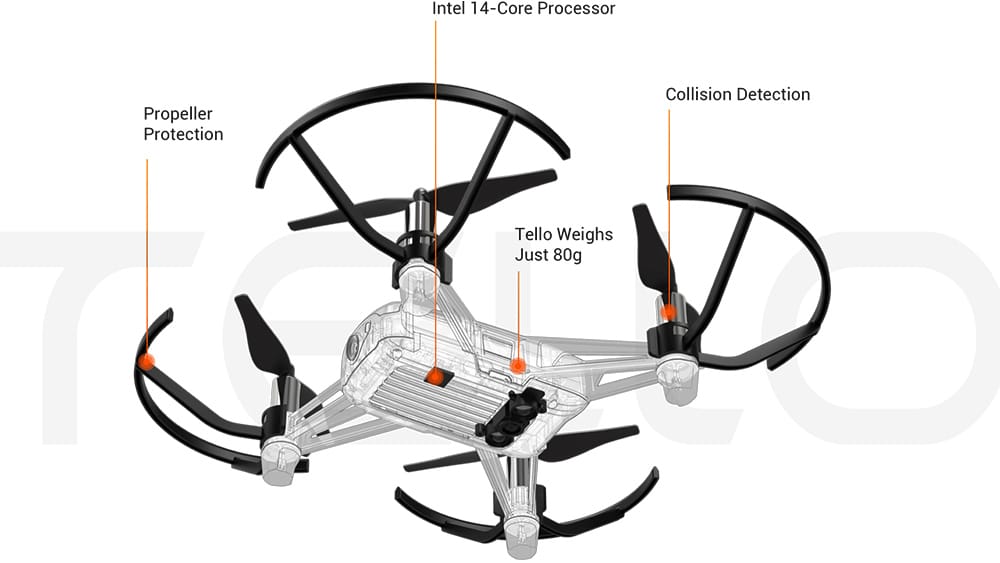