Can you Fly a DJI mini 2 in cold weather?

7 tips to fly your drone safely in the winter

Since both the DJI mini 2 and the Mavic Mini are two of the smallest DJI drones, it's normal to worry that they might not handle cold weather too well.

You can fly the DJI Mini 2 and Mavic Mini in weather between 32° to 104°F (or 0° to 40°C) and even in colder temperatures if you preheat the batteries.

What is the lowest temperature the DJI Mini 2 can fly in?

The DJI specs give us some conservative measures in terms of temperatures, and you should respect them if you're interested in the well-being of your drone.

However, if you're naughty and insist on taking that incredible winter footage, there are ways to push the drone a bit.

If you're flying in such cold temperatures with the Mavic Mini or Mini 2, there's a big chance a cold temp warning will appear on the screen.

From personal experience, I strongly recommend you not to go under -10°C ( 14°F) with the drone outside as there is a considerable risk of damaging the battery and crash the drone.

Another dangerous medium for drones is fog, so check out my article on how to fly a drone safely in fog where I also mention the Mini 2.

What are the dangers of flying in cold weather with a DJI Mini drone?

1.One of the biggest dangers of flying in cold weather with any drone, not only the DJI mini, is that the battery will not work correctly, and your flight time will decrease considerably.

With the DJI Mini 2, I have experienced a 5-10 minute total flight time decrease in freezing weather and sometimes unexpected sudden drops.

2.There is a change to permanently damage the battery if you keep it too much in low temperatures and potentially have the drone drop out of the sky entirely because of a power shortage.

3.After each flight, check propellers for ice that can cause vibrations which could cause the drone to fly erratically and the footage to have a jello effect.

Why does the Mini 2 fly less time in cold temperatures?

LiPo batteries like the ones DJI has, work through a chemical reaction that is considerably slowed when the surrounding temperatures decrease and produce less current than at higher temperatures.

1.Buy a pair of hand warmers

There are hand warmers in a bag that you can buy for cheap, put inside the pouch with the drone batteries, and keep them hot before putting them in the drone. This will keep them from freezing quickly and allow you to get a flight un very low temperatures before you even get a warning in the app.

Check out these hand warmers on Amazon.

There are also electronic hand warmers that you can buy from amazon if you don't want to always purchase small bags. 2.Keep all the drone batteries in a bag

If you don't have a hand warmer, keep the batteries in a bag somewhere isolated.

As the drone battery can quickly decrease without any warning, you might find you're too far away and not have enough battery to get back. Keeping at least 30 percent battery life will make sure you don't over-discharge the batteries and damage them for further use.

4.Use a landing pad or hand launch

Do not launch the drone from the snow directly, even if it's harder snow, as it might get inside the quadcopter and damage the internal components and even the battery too.

Check out some landing pads over here. These are probably some of the best accessories you can buy for winter flying, as you can make many mistakes with cold and unprecise hands. It will make your experience flying the DJI Mini drone way better overall

Some of the best photography gloves for drones.

Hi, I'm Paul.
A big drone enthusiast, reviewing, comparing and writing about drones since 2015. I'm all about helping people enjoy and even monetize their hobby.
Waterproof drone to fly in snow 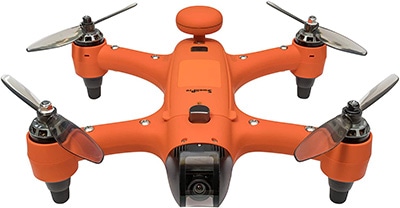